The Renovation: A Reverse Harem Novel by Mika Lane 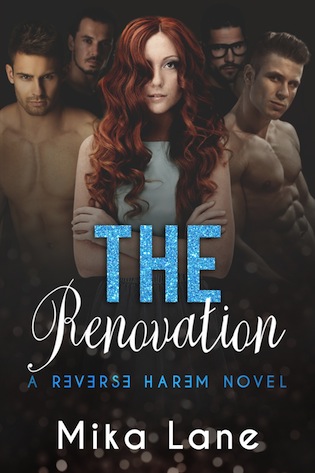 I don’t believe in fairy tales and I don’t waste time wishing for one. I learned long ago that luck smiles on the—well, lucky—and that the rest of us can just go to hell. So when my boyfriend ran off and left me with a bunch of debt, I knew better than to wish for a miracle. But then one came my way, in the form of four—count ’em four—hot, sexy men. But as luck would have it—or wouldn’t have it, in my case—I couldn’t have a single one of them.

I had to admit, he was adorable in that Clark Kent/Superman sort of way with short, tidy hair, and somewhat nerdy glasses. I could just see the tip of a tattoo peeking out from his shirt collar and several closed up piercings on his ears. Was he a closet bad boy?

He was looking at me like he wanted to say something else. Like he knew me in a way that was impossible considering we’d barely had one conversation, let alone discussed anything meaningful.

Carter was so…strong and self-assured. That’s what it was. He seemed like he’d never be afraid of anything. Like if something bad came his way, he’d find a way to handle it. I needed someone like that on my side.

While positioned behind me, he whispered his fingers over my throbbing core, with only the lace of my panties keeping him away from my searing flesh. I wiggled into his touch to increase his pressure and to also let him know I wanted more. Yeah, more.

It was nasty, and naughty, and I loved it.

One of his hands held his cock still, and with the other, his fingers gently pried me open. I felt pressure at my opening, and bounced lightly on him while I got used to his girth. He was fucking huge, stretching me to capacity, and then stretching me some more. He rocked his hips to get more deeply inside me, and I threw my head back and moaned.

He pulled my shirt open and sat back, looking at the white lace of my bra, trickling his admiring gaze over my trembling body. The way he looked at me, like I was the most beautiful woman on earth, was so fucking hot, I had to put a hand on his shoulder to steady myself. He stood up and turned me around, unzipping the back of my skirt and pushing it down my hips until it hit the floor in a puddle around my feet. I started to kick off my heels.
“No. Keep them on,” he growled from behind me.

I could make some lame excuse and walk away from them all, go back to my shitty little house, and wait for the fucking bank to come and kick me out. But I was tired of letting life just happen to me. It was my turn to make shit happen, and everybody better get out of my fucking way.

Of course, I wanted to go to my fucking house. Or his house. Or anyone’s house. Whichever was closer. How about behind that dumpster over there, in that alley?

A National Reader's Choice Awards finalist, Mika always deliver a hot, sexy romp, often with imperfect characters, and a promised happily ever after (or at least happy for now).

She LOVES to hear from readers, and can be found at www.mikalane.com, and facebook.com/mikalaneauthor, when she's not dreaming up naughty tales to share.

4 Comments to The Renovation: A Reverse Harem Novel by Mika Lane