The Right Fit by Daphne Dubois 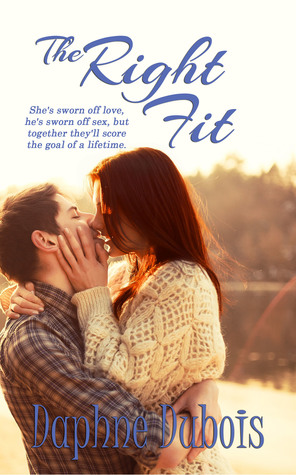 When Maxine Nicholls discovers her fiancé is cheating, she turns to fast food and nighttime soap operas, but her sister has a plan—unbridled rebound sex with a stranger.

As one of Toronto’s hottest players, Antony Laurent tallies scores on and off the ice, but when the chiseled defense man hits a slump, rumors of a trade to the minor league send him to ambush a managers meeting at a posh club.

That night a chance encounter ends up as an unforgettable evening of passion. But Maxine and Antony are about to discover a game of casual hook ups can lead to something neither one of them thought they deserved—the right fit.

She dropped her gaze and stared at his hands. God, they are big hands. Big hands, big… “Do you want a coffee?” she blurted out.
“A coffee? Non.”

“Or maybe you need the washroom?” She pointed down the short hallway that lead to her bedroom.

He looked down the hallway, then back to Maxine. “You want me to use washroom?” he asked seriously.

“No.” She backed up a few steps until she reached the kitchen counter. The heat under her dress was now slick and uncomfortable. She glanced down and saw a mint leaf sticking out of her cleavage. Classy lady.

The romance cover model ran a hand through his hair again, making his biceps strain under the t-shirt sleeve. Maxine suspected he’d practiced that move in the mirror a few times. “Then what do you want?” he asked.

A burst of nervous laughter escaped, but then her smile faded. “No one has asked me that in a very long time,” she said. Slipping off his jacket, she laid it on the counter, letting her finger trace the stitching along the zipper, trying to build up her courage. “Why did you follow me into the cab?”

“Because no one has ever run away from me before.”

Rolling her eyes, Maxine looked up and saw that he was smirking. “Rejection is a new thing for you, I’m guessing.”

“Is that what you call inviting me here?” He tossed the ball cap and it landed perfectly on the dining table. The floorboard creaked as he took a step closer to her. There was a spark of anticipation in his eyes.

“Hold on, cowboy,” she said, putting a hand on his chest. My God! His muscles are rock hard under his shirt. Who the hell is this guy? She cleared her throat. “What makes you think you can kiss me again?”

He was still as stone under her touch, but Maxine could feel herself falling into his stare. “You kissed me,” he said, his voice ridiculously smooth. “There is a difference, I promise.”

It wasn’t only the French accent, but the confidence in his voice that made her knees almost unhinge. Her hand was flat on his chest; his racing heart was keeping time with hers. “That sounds like a proposition,” she said.

“It can only be decided one way.” Then he repeated his earlier question. “What do you want?”

He was so close she could see the faint brown and black colors of his stubble. There was a cleft in his chin. What do you want? An image of the long white box hidden in the closet was ignored; all Maxine wanted at that moment was to mold herself into his arms and forget about the last four years. “Kiss me,” she said.

His fingers grazed her cheek, tucking a wave of hair behind her ear. “Un moment,” he said. “A man should be prepared.” He peeled the last mint leaf off her chest then placed it in his mouth.

Maxine giggled through a surprised expression, which faded into a sigh.

Then, with deliberate care, he brought his lips down to hers, perfectly fitting their mouths together. He gently moved his chin starting a slow pace, controlled but with a sense of held back urgency.

This was nothing like the hastily stolen kiss at the club.

The cautious seduction was almost too much for Maxine. She wanted to taste him fully, kiss him back hard—tackle this moment like Alexis Colby. 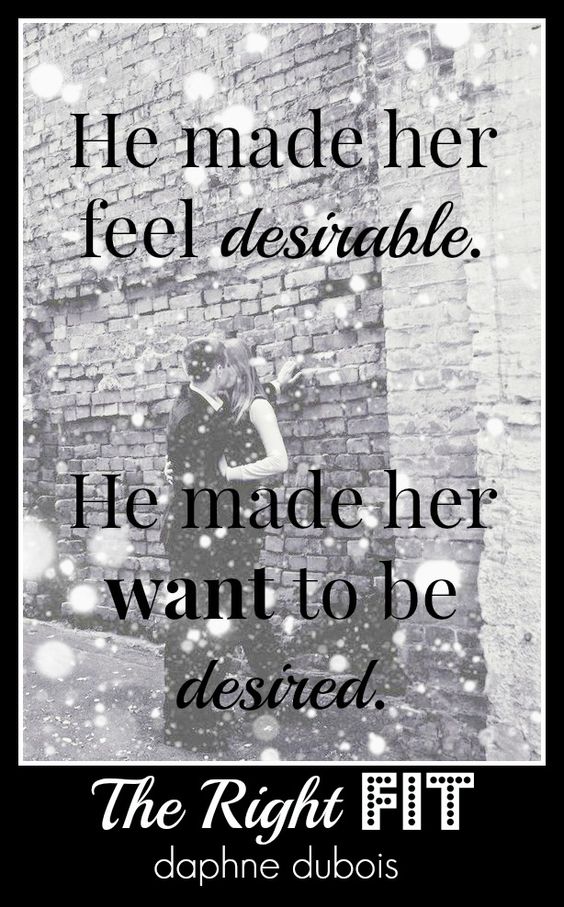 Daphne Dubois writes contemporary romance and believes the right book at the right time can make all the difference. When she's not putting her characters in compromising positions (ahem), she works as a registered nurse. A member of the Writer's Federation of Nova Scotia, she lives in Eastern Canada, the most romantic place in the world.

You can also find her writing for teens as B.R. Myers.

4 Comments to The Right Fit by Daphne Dubois