Trapped by Fate on Reckless Roads (Neither This, Nor That, #4) by MariaLisa deMora

Series: Neither This, Nor That, #4 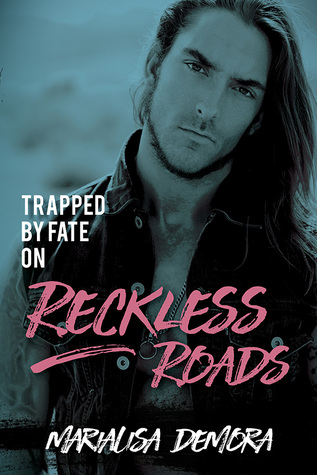 In the rough realm of bikers, there are no shortcuts to win a place among the old guard. It’s a world where respect can only be earned, trust is painfully gained, and loyalty will be fiercely returned.

Jerry Rogers lived his life bound to those firm tenets which anchored his brotherhood. MHL&R was more than a patch on a leather cut, it ran thick as blood through Retro’s veins as he worked to better things for his club, and family.

Locked for years in a loveless marriage, Retro still found a sense of pleasure and peace knowing he’d at least always done his best to buffer their children from his single mistake.

Confronted by evidence that what happened in the past wouldn’t remain quietly buried any longer, Retro embarks on what might become his most important journey down memory lane. One that can only end in blood…and death. 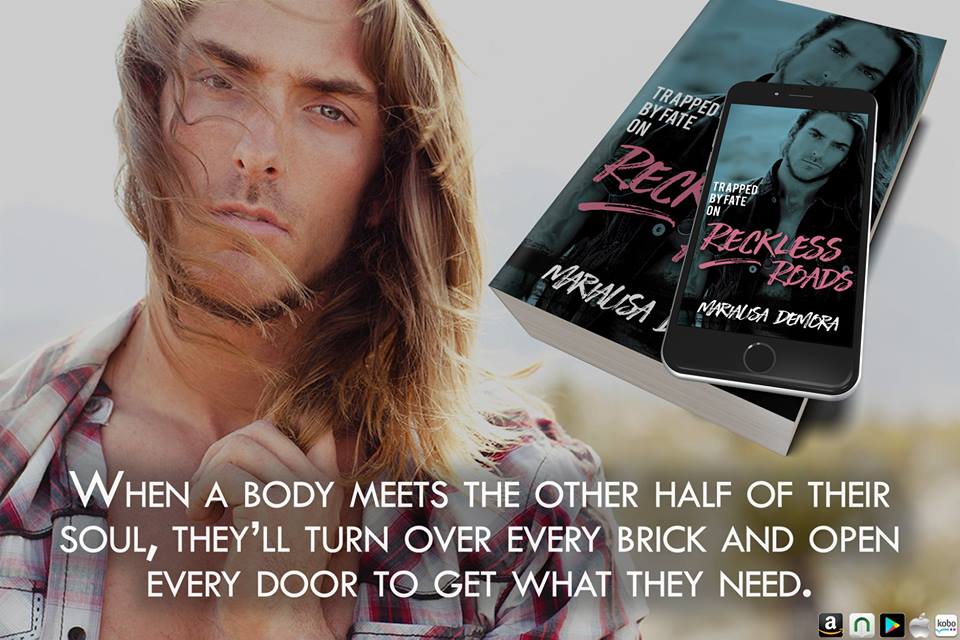 Trapped by Fate on Reckless Roads
(Neither This, Nor That, #4)
by MariaLisa deMora © 2019

Jeremiah Rogers angled his body away from the other person in
the room, shifted his gaze to the window, and caught sight of the reflection of
his own face. Gaunt and aged in ways he hadn't been a year ago, he stared into
the echo of his eyes.

Without turning, he said, “I can’t offer an excuse, because there isn’t one. I won’t insult you by saying it never meant anything, because you know how I am. You’ve always known how I felt about her. She...” Here he paused, at a loss for words for so long his soon-to-be ex-wife stirred restlessly, the fabric of her jeans making a shirring noise as her legs crossed and re-crossed. The mattress groaned softly, a sound that had often been heard in this room in years past, and one that made guilt dig its hooks a little deeper into him because it had masked their lie.

Her silence drove him forwards. At this point, they’d been talking so long he was ready to just have it over with. “I knew when I took you to my bed we’d wed. Your father wouldn’t have allowed anything less. I also—”

He turned and saw her tear-streaked face looking at him out of the shadows.
They’d been talking so long the sunset had stripped the color from the room,
leaving everything in banded shades of gray and beige. He swallowed and pushed ahead, needing to have all the secrets laid bare. “I also know you didn’t love me then. We’ve made it work all these years, because neither of us wanted
more.” Retro shook his head. “I’m no longer content to live this way.”

“You know what’s changed, Wanda.” She was smart, and he
suspected she’d already put two-and-two together. He was done living like this,
forcing himself through the days and avoiding the nights. Her lack of follow-up
on her question told him he was right.

“What about our kids, Jerry? How will we tell them?”

At her words, he pulled in the deepest breath he’d taken in days, because with two sentences she’d aligned herself at his side. She knew the lay of the land. She’d always known they weren’t a love match. It was one of the things that made her so bitter towards his brother Isaiah, because he’d found his love. Gone now for too many years, but Isaiah had kept his Hope’s love alive in how he was raising their children. Wanda had tried to drive a rift between the brothers over it. Unsuccessfully.

“Nelda won’t be surprised.” Their daughter was always putting together unexpected puzzles, and from the sadness she’d borne in the past months, Jerry knew Nelda had seen how he’d been pulling away from her mother.

“Boys will follow her lead.” He lifted his hands and scrubbed across his face.
“I never meant—”

“You’re not the only one to stray, Jerry.” Wanda’s declaration took him by surprise and his palms were still pressed to his cheeks as he jerked and looked at her. “I haven’t been happy for years.”

His blood started to boil and he dropped his fists to his hips, staring down his nose at her for a moment. Then he laughed once, a humorless bark of noise meant to keep him from saying things best left unsaid, and he turned back to the window, their dimmed and blurred reflections now highlighted by a deep blackness. “Since it all happened years before you came to my bed, I wouldn’t actually classify it as strayin’, Wanda. Can you say they were important to you at least?” He’d had suspicions once or twice, but Wanda had been so… blameless. Every time he’d thought to bring up the idea of separating, just the look on her face would seal his lips.

“One was.” She gave him that, and then he saw her reflection move, shifting to the opposite side of the bed. She slowly stood and then waited for a moment, and when he didn’t turn, told the room, “I’m going to start supper.”

Trapped by Fate on Reckless Roads (Neither This, Nor That, #4) by MariaLisa deMora
Rosa's rating: 5 of 5 iScream Cones

"—the me with you is yards and miles better than the me without you."

MariaLisa deMora always touches my heart with her words. Don't get me to lying by trying to explain it to you, but I think it's the dialogue. She gives her characters a voice that I can hear and feel. I'm especially fond of her bikers because they have their own special language that doesn't require as many words but every one of them count.

I also have to take my hat off to her for keeping up with all of her many amazing characters that crossover between her multiple MC Romance series. She takes her readers deep into each one that she chooses to focus on in her books and makes us feel like part of the family. So, when they pop up later it's like a reunion that brings a smile to my heart. I get excited every time a new book is introduced about a character that I've already met because I know she will give them the full treatment and I'll get all of my questions answered...eventually. Yup, you guessed it, she loves to keep an ace in the hole to bring out our WTF face. I can just imagine her cackling in the background when she shocks the shit out of me, time and again.

I can't give you details, but I can tell you that you are gonna love Retro as much as I do. He's the president of his club and he takes his job very seriously. He protects what's his, and that includes his blood family and his club family. He's carefully built his club with patched brothers that he trusts with his life and they would follow him straight to hell if he asked them to. I floved Trapped by Fate and found myself completely immersed in the twists and turns that took me from the past to the present and back again. "Pages within books within libraries, you know?" I'm so pumped about where the series is headed and I can't wait to get my hands on the next installment. The line forms here... 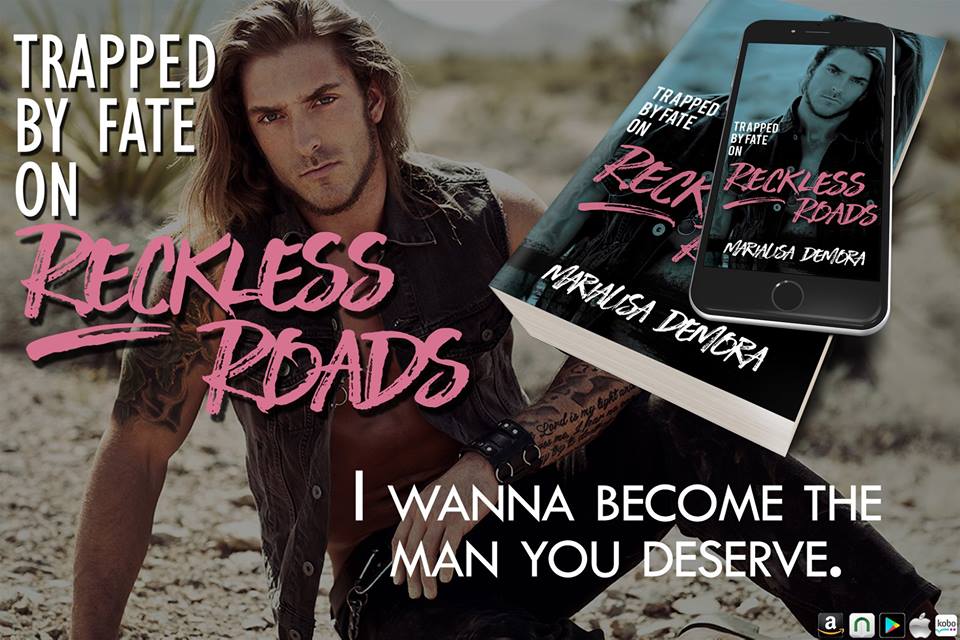 "MariaLisa deMora always touches my heart with her words.... She gives her characters a voice that I can hear and feel" - Rosa Sharon, iScream Books Blog
"Trina and Retro are up in some of my top couples I love that this writer has shared." - Fran Zoch, Little Shop of Readers
"Trapped by Fate on Reckless Roads is another testament to what an incredible writer MariaLisa deMora is. Her storytelling always exceeds my expectations and I consider her a Queen of character development." - Naughty Mom Story Time 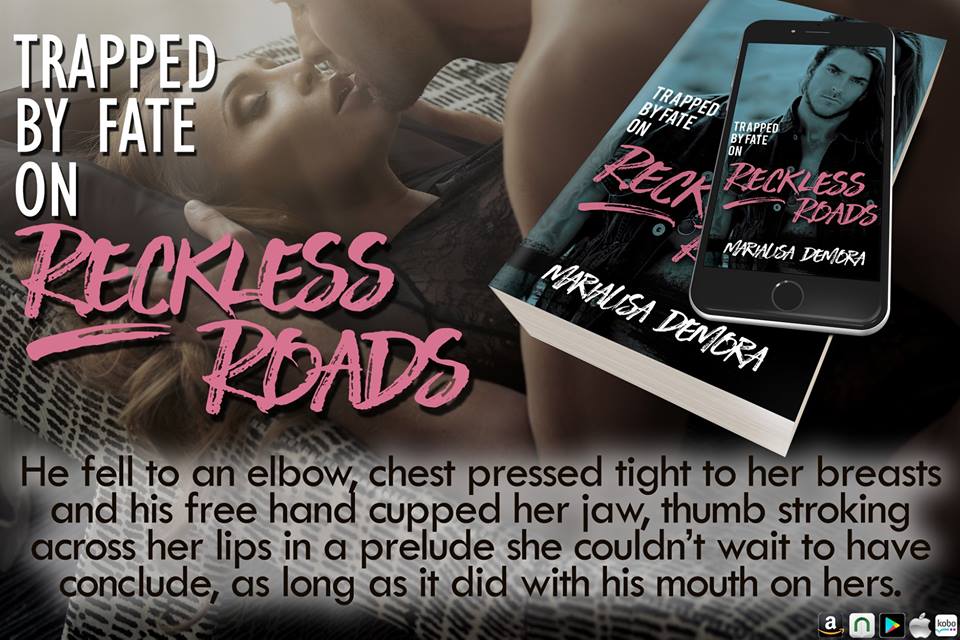 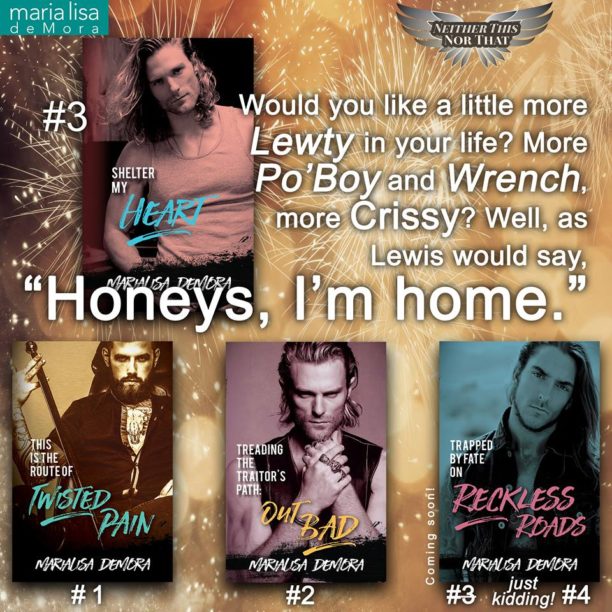 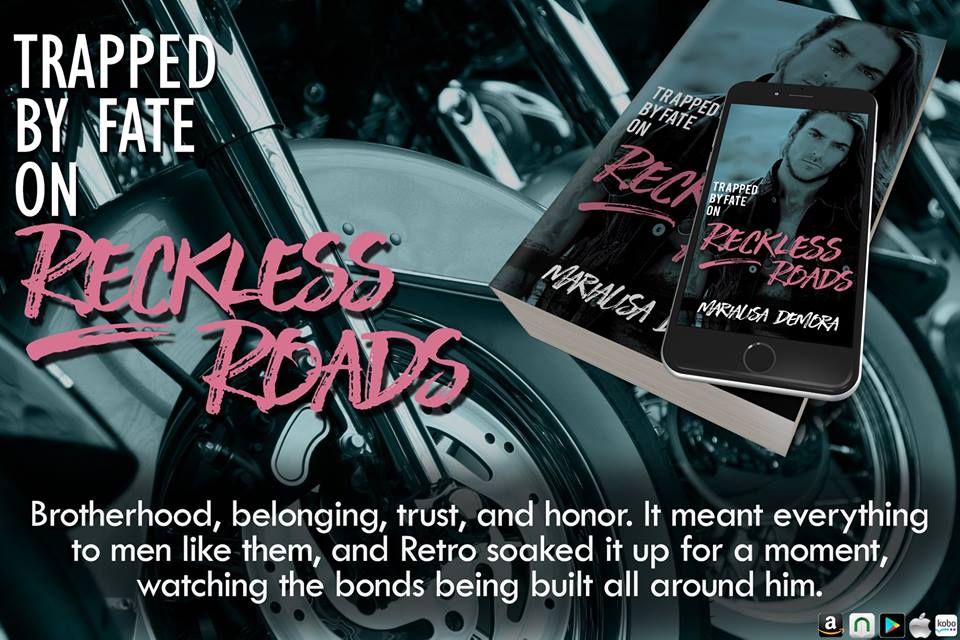 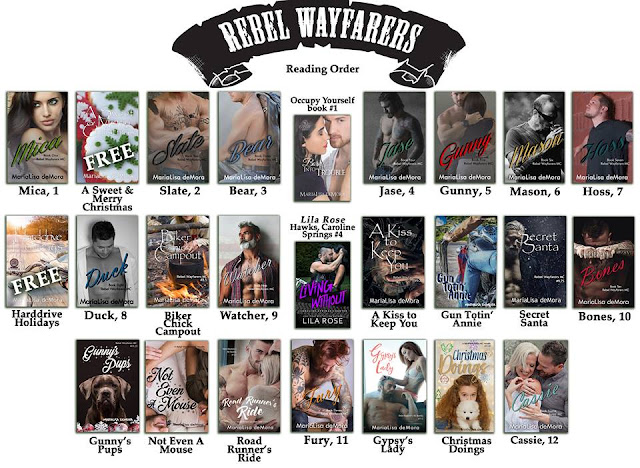 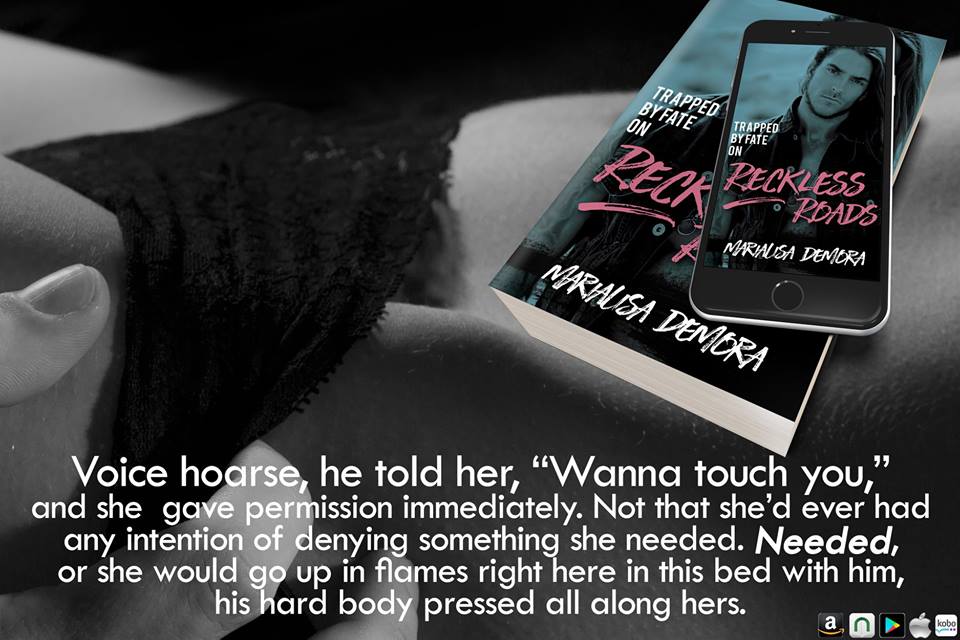