Jagger
She has always been my weakness. The one girl that would ruin me. The only problem? She’s one of my best friend’s little sister. Bresin Prescott, sexiest fucking girl I've ever laid eyes on, sassy mouth, quick wit, and a body to kill for. I would kill for her. She is everything I want and more, but is she worth letting my secret out? The one secret that is buried deep can be spilled if I'm not careful. the one Secret that even my rich family can’t protect me from.

Bresin
There hasn’t been a time where I didn’t love Jagger Bishop. I’ve lusted over him for years. One night he made all my dreams come true, but then he pushed me away. His protective streak is still alive and well though. I can’t sleep with anyone else without him becoming my personal pit bull. I want him. He wants me. What is so hard to figure out? One thing I know is that I will always fight for him even if I'm fighting against him.

I hear the rumble of a motorcycle a block or two away, making me grin. I love that damn Harley. I swear, if I weren't already in love with the idiot, just seeing him on that bike would do it for me.

I imagine his frown as he rides down the street, looking for me. He’ll figure it out. If you ask me, he really should have known better than to tell me to stay put. He turns the corner, his headlights shining on me. He guns the engine, coming to a stop a few feet away.

I flash him my sassy smile and walk over as he puts down his kickstand. “Oh, my goodness. It’s Jagger Bishop! Should I throw my panties at you now, or wait until after the ride?”

A grin spreads across his face as he reaches out and grabs me, pulling me closer. “I swear, that smart mouth of yours is going to get you and me into a lot of fucking trouble.”

My eyes rake over his body, mentally tracing every tattoo he has on display. I know what he looks like under that damn t-shirt, and I wish I could pull it off him right now.

“I thought you liked my smart mouth.” I run a finger along his bicep.

He shakes his head. “I only like it when it’s wrapped around my dick. So, unless you want to get me killed, I suggest you get your sexy little ass on my bike so I can take you back to your dorm.”

I roll my eyes and fist my hand in his shirt, moving closer. “I think you forgot a word.” My mouth is no more than a breath away from his, and it’s killing me not to close the distance. Then again, if he was just at a party, who knows where that mouth has been.

“I didn’t forget shit. I can leave you here, if you’d rather.”

This is what I’m talking about. He’s an asshole. I frown and pinch his nipple, twisting it as hard as I can.

I don’t know how, but I’m suddenly straddling his lap, leaning back on the gas tank of his Harley. His eyes darken as they trail over my body. One of my heels falls to the ground, and my dress has ridden up so far, I’m pretty sure my clit is on display. My G-string panties don’t hide any secrets right now. As much as I curse that, it turns me
on.

Hell, maybe he just turns me on that much. I’m screwed, and I don’t mean literally. He’ll probably just play with me and get me all hot and bothered before he tells me to find my own way home. If he does that, I will commit murder and have my brother get rid of the body. He’s the one who brought Jagger motherfucking Bishop into my life in the first place.

“Stop teasing me before I make us both hate me in the morning.”

Undeniable is my first read by K. Renee and omg was it hot! Best Friends sibling is definitely one of my favorite genres.

Jagger and his friends have everything, money, notoriety and women. But there is only one girl that matters and he can't touch her because she's his best friends sister. She's everything he wants and more. If she found out what he's hiding would she still feel the same?

Bresin has wanted Jagger for what seems like forever. She knows he's holding back because of her brother.

I loved Breslin, she knows what she wants and she goes after it. And damn the girl has a mouth on her.
Jagger is beyond hot, his protectiveness alone was swoon worthy. His whole bad boy persona could melt the panties right off you.

This series is going to be hot! Undeniable is just the beginning. And I seriously cannot wait for the next book.
One click this bad boy now!! 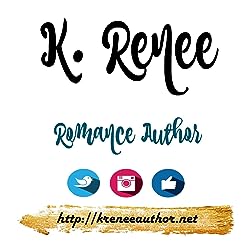 K.Renee is from sunny, California. Creative by nature, she decided to put her imagination to paper. K. Renee is an avid reader. During the day she works in an office and at night she writes. These stories have been in her head for years and are finally coming out on paper.